We have a humdinger of a Disneyland news update for you today folks. Last night, Disneyland Resort President Ken Potrock gave his state of the resort address to Anaheim community leaders and revealed some big plans for the resort. There’s a lot to cover here and plenty of concept art.

The old AMC Theater building was recently demolished on the west side of Downtown Disney. The Disney Resort is revealing some news about the look of what’s coming, and some new restaurants on the way.

The newly cleared space is massive… 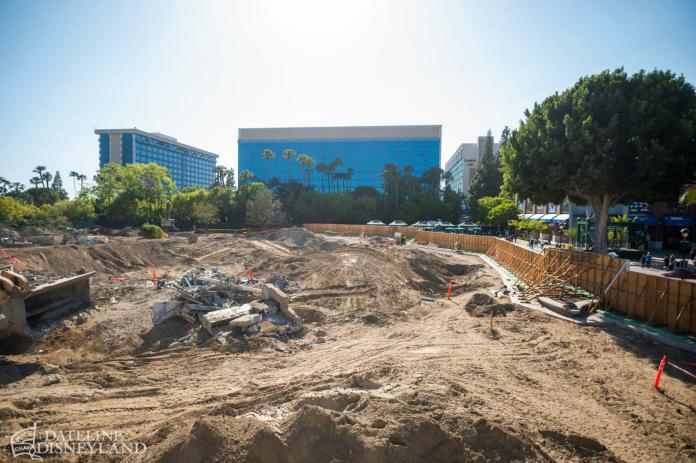 Coming soon to the old AMC space is a sort of new mid-century modern-looking strip mall filled with new restaurants and shops. 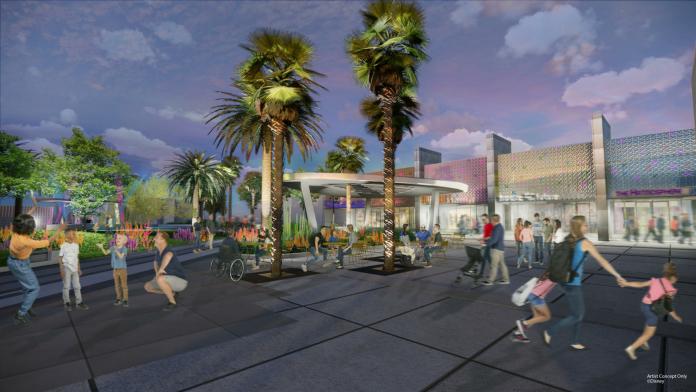 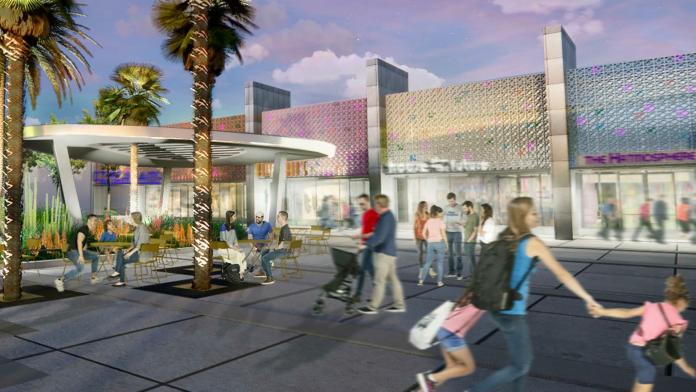 Nearby there will also be more green space, a stage, and even some event space. 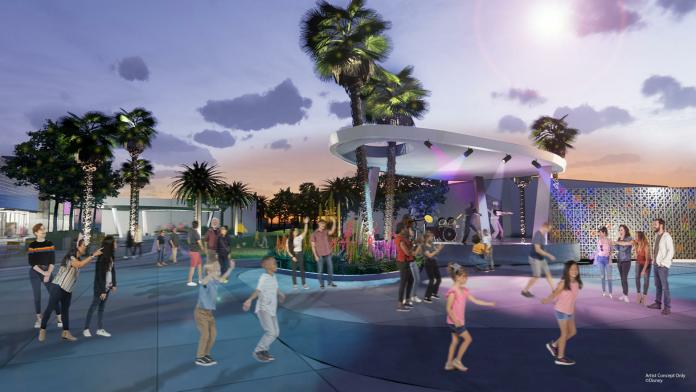 The current entry to Downtown Disney will drop the whimsical and take on a new retro vibe:

Oddly, the entry appears to have turnstiles in the concept art. 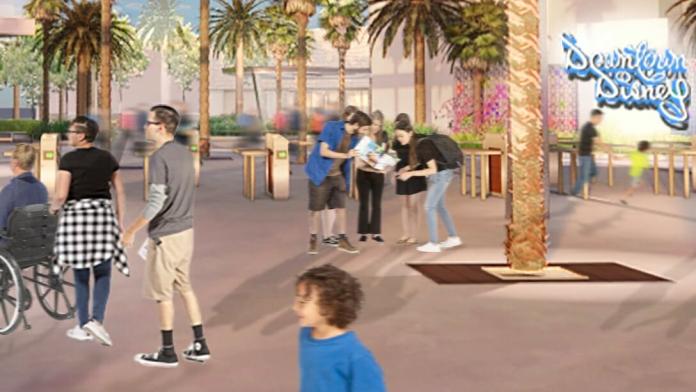 And what will the new offerings in the reimagined Downtown Disney be? Well, we have a few new establishments to share with you.

Locals will recognize the name of the super popular dumpling restaurant, Din Tai Fung. The ever-popular handmade soup dumpling purveyor will be headed to Downtown Disney. The last time we attempted to dine at the South Coast Plaza location, the wait was 4 hours. Just imagine what the waits will be at Disneyland! The restaurant is described as being located near the “Lawn Pavilion,” which we believe to be on the west end of Downtown Disney near the Disneyland Hotel. 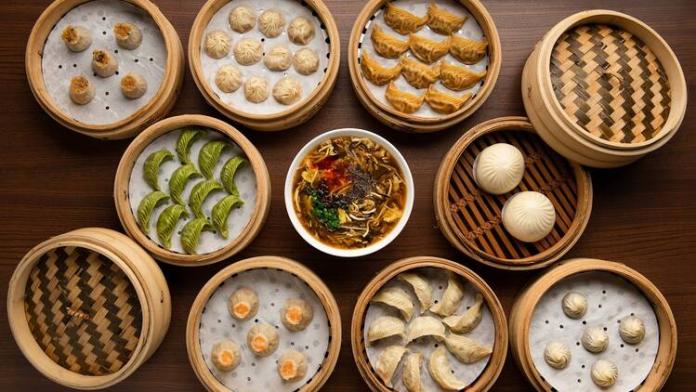 Chef Carlos Gaytan is bringing high-end Mexican cuisine to the old Catal & Uva Bar locations. The new Paseo and Centrico will still be owned and operated by Patina Restaurant Group.

Shockingly, Disney is keeping the Jazz Kitchen, but it will lose many of the decorative elements that make it so unique and will take on a more generic strip-mall look. 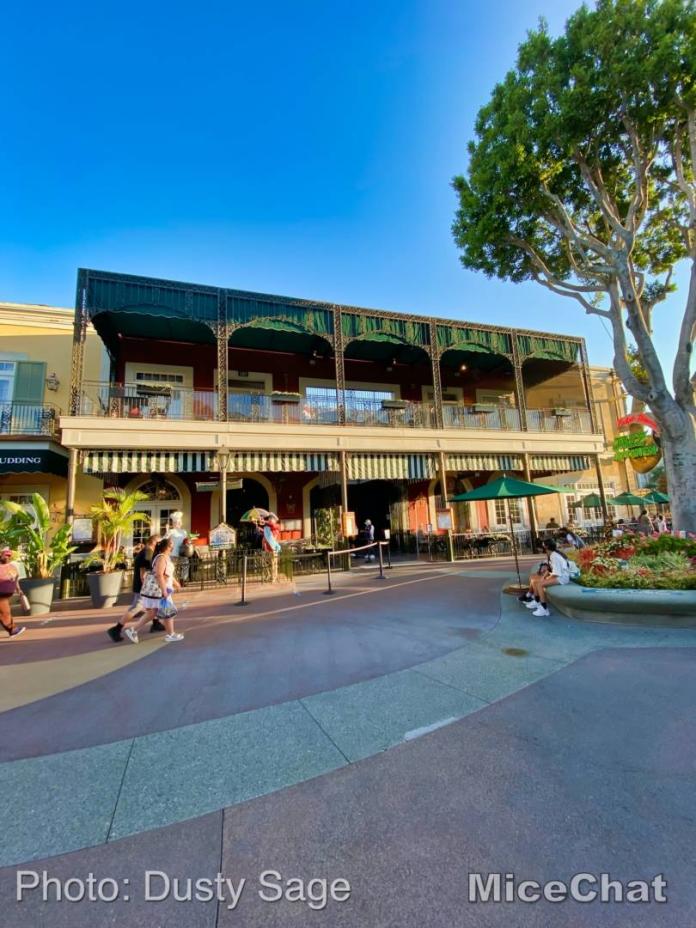 And here’s the concept art for the renovated space: 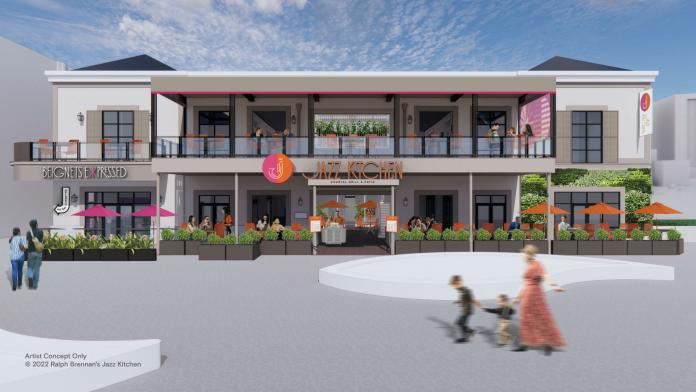 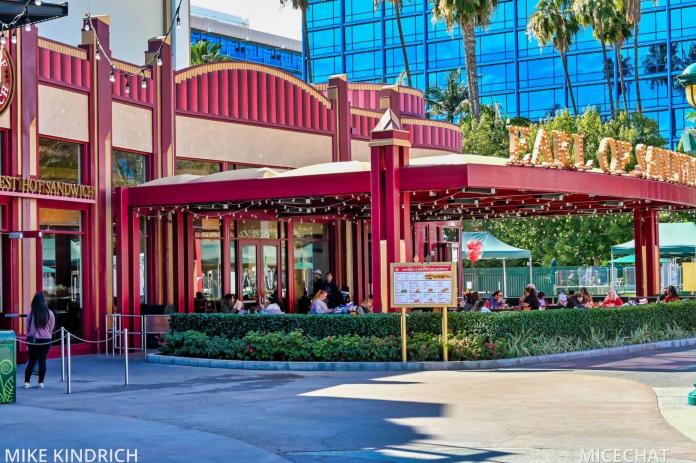 The popular and affordable Earl of Sandwich was demolished along with the AMC theater. But the location will get a special pop-up sandwich location later this year near the old ESPN Zone and the Star Wars Outpost. Hotels of the Disneyland Resort News

Lots of changes are headed to the hotels of the Disneyland Resort.

But there are some even bigger hotel projects in the works…

As we’ve previously reported, Disney’s Paradise Pier Hotel is slowly transforming. The hotel will be adding Pixar artwork and style throughout the building. The new hotel doesn’t yet have an official name, but we are calling it the Pixar Hotel for now just so folks get a clear mental picture of what the theme is.

Guests will find a Luxo Lamp balancing atop a Pixar ball in the lobby of the hotel. Above, light-catching mobiles evoke Pixar films and characters.

And, as you read here first, Disney has confirmed that a walkway is being built for Pixar Hotel guests to access Disney California Adventure directly (the walkway is located just across the crosswalk from the hotel near the entry into the parking lot for the Grand Californian Hotel). Ironically, California Adventure was built with a special entry for Paradise Pier Hotel guests, but it was quickly abandoned and later rendered unusable by construction on rides and Grand Californian hotel expansion. The new pathway shouldn’t take too much longer to complete.

We’ve been following the construction of the 4th tower at the Disneyland Hotel for a couple of years now. But now that the new Disney Vacation Club tower is going vertical, it finally has a name, “The Villas at Disneyland Hotel.” 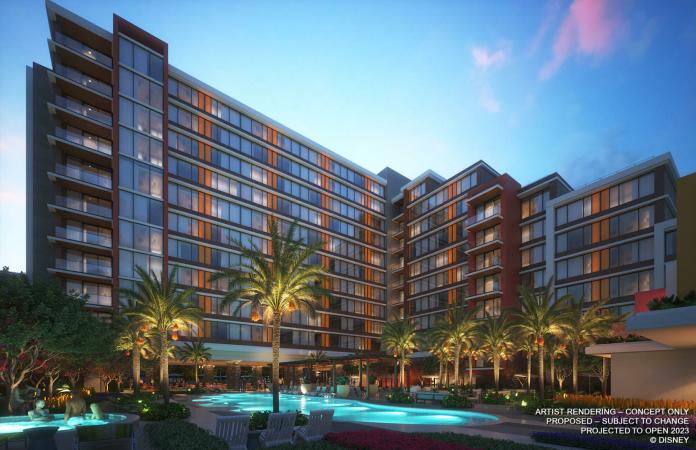 But it’s still a long way from being complete. Here’s what the property looks like now… 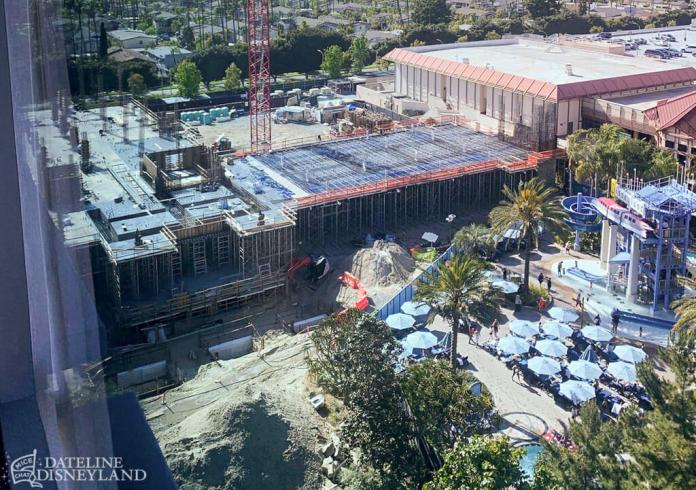 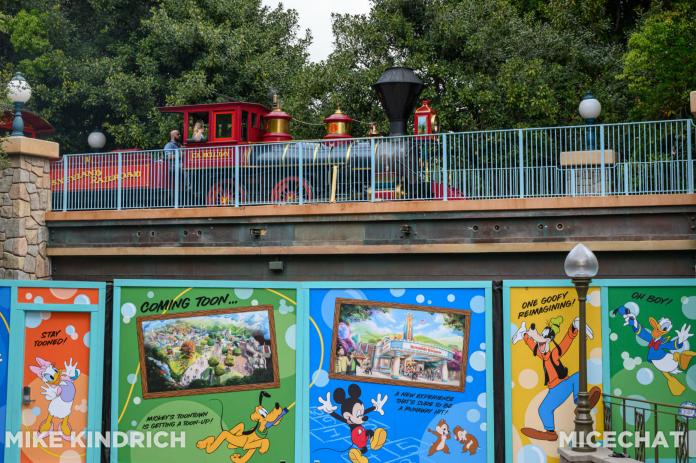 It’s no secret that Mickey’s Toontown is undergoing a complete reimagining in preparation for the early 2023 debut of Mickey and Minnie’s Runaway Railway attraction. All pathways and some buildings and attractions have already been demolished and crews are hard at work on the land. When it is done, there will be more trees, green space, improved food service, and a brand new attraction.

From the air, you can see that all of the fountains, pathways, trolly tracks, and some buildings have already been removed: 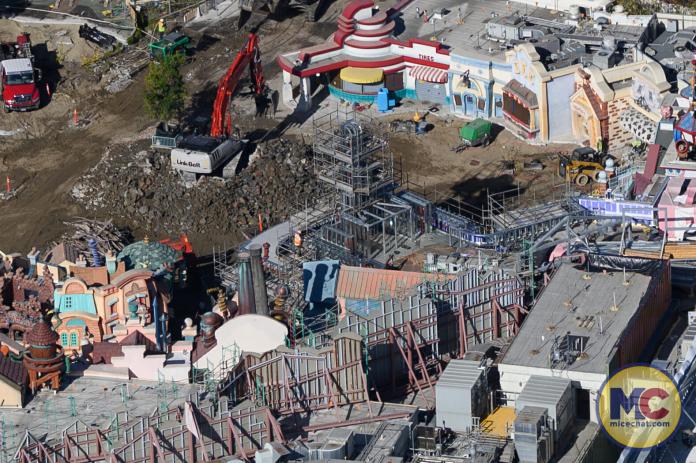 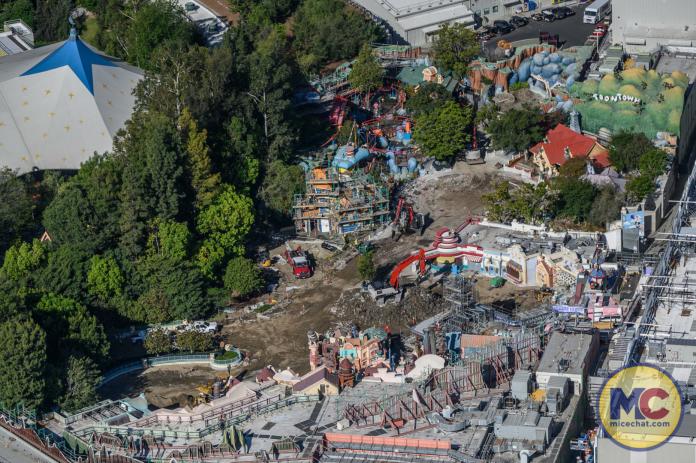 It’s also now confirmed that Mickey and Minnie’s Runaway Railway will be a slightly enhanced version of the Florida original and have an entirely unique queue. 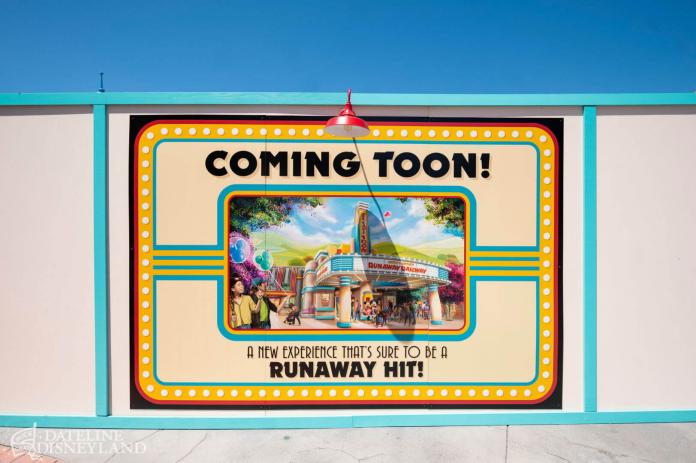 There are a few more items from the event worth noting: 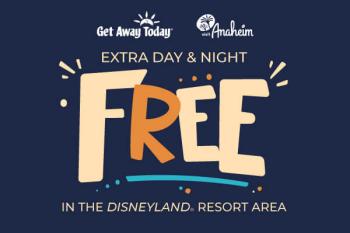 Are you ready to get away? Our travel partners at Get Away Today are here to help you make new family memories with discounted theme park tickets, hotels, and vacation packages. Get extra days, big savings, and perks on travel to Disneyland, Walt Disney World, Disney Cruise Line, Adventures By Disney, and other theme parks and family travel destinations. Snap up those deals while you still can, with your MiceChat partners at Get Away Today- HERE

For more news and photos from the Disneyland Resort, don’t miss our huge Monday Update: